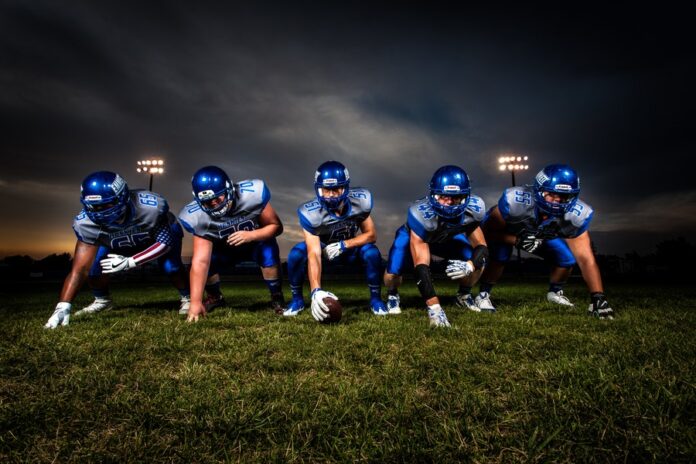 The distinction between soccer, as Americans like to call it, and rugby is clear-cut but when it comes to different kinds of “rugbies” then confusions sets in. In essence, any game in which players toss the ball (mostly) backward and run to score is called rugby. In the United States, football is easily differentiated from the European rugby but in Australia, rugby can get mixed up with AFL.  Is the size of the goals, the shape of balls or the rulebook what sets them apart, nobody seems to be 100% sure.

The shape of the field

The first thing any spectator notices is the difference in the shape of the field. The Australian Rules Football is played on a field of a unique oval shape, unlike standard rugby that is played on a rectangular pitch. Both fields are grassy and more than often AFL fields are actually cricket fields that have been converted into rugby fields or are still used for both sports.

The size of the field

Apart from the shape, there is also a slight difference in size. A standard rugby field is 100 meters long and 70 meters wide, while a standard AFL field can vary in dimensions. The minimum length, which is somewhat hard to measure to the last inch, can vary from 135 to 185 meters, while the width is anywhere from 110 to 155 meters. This renders AFL fields bigger in surface size that the ones used for standard rugby.

The shape of the ball

While a ball for American football is easily distinguished from the one used for rugby, the AFL ball is hard to differentiate from a rugby ball. Both are egg-shaped but the one used for AFL seems to have a larger “hump.” Also, unlike most rugby balls, it has seams that make it suitable for grabbing, catching, and running with it.

The number of players and substitutions

In standard rugby, there are 15 players on the field and a total of 7 substitutions are allowed during a single game. In AFL there are three players more on each team, totaling at 18. Because there are more players in Aussie football, fewer subs are allowed: only three.

The length of the game

Although the total duration of the game is the same in both AFL and rugby, 80 minutes, the game is divided differently. In rugby, there is a straight-cut difference of two halves, each lasting for some 40 minutes. In AFL however, there are quarters lasting 20 minutes each. The end of the second quarter means the (unofficial) end of the first half.

Finally, there is a difference in how teams score points. In rugby, the ball has to be carried into the in-goal area. The team who succeeds in doing this is awarded 5 points. The second way you can score in rugby is by kicking the ball between the two vertical goalposts and this is worth 2 points. This scoring method is called a conversion.

In AFL, as we stated earlier, no points are rewarded for carrying the ball inside the end zone. Instead, kicking is the only means of scoring. There are four goal posts and points are awarded based on accuracy. If the ball goes through the outer posts, then the kicking team gets 1 point and such a kick is called a “behind.” If the ball goes through the inner goalposts, that’s called a “goal” and the kicking team gets 6 points. The funny thing is, the posts are not of the same size and diameter, so AFL clubs often have to install only Australian made goal posts that are suited for AFL.

The rules: passing and tackling

Besides the obvious differences that spectators can notice, the most prominent one being the shape of the field, there are also subtle differences in the rules. When it comes to passing, we all know that there is no forward passing in rugby, while passing is achieved in AFL only by the means of kicking or punching the ball.

When it comes to tackling, one of the most impressive things about rugby is that a successful tackle by the defensive players does not mean that the ball is “dead” and the game goes on. The same goes for AFL, but the tackles are not as hard since the player doesn’t have to be taken down entirely. Although there are rough tackles in AFL, the tackling is, in general, less savage than in other sports.

Finally, the unconventional “difference” between the two sports lies in their regional popularity. Rugby is far more popular because of a single reason: it is a worldwide sport. The Six Nations Cup is a sporting event that every sports fan on the planet has heard of, while AFL cannot boast the same. However, when it comes to its country of origin, AFL is definitely preferred by Australians.

Lori Wadehttp://graysmark.co.uk
Lori Wade is a content writer who is interested in a wide range of spheres from Lifestyle, Technology, Business, Health, education and online marketing to entrepreneurship.
RELATED ARTICLES
Lifestyle

This Amazing Massage Service for Women is Changing The Game

This Amazing Girl Is on Top of The Emerging Fashion Empire

Graysmark is the online platform to share and read the news about Blogging, Money, SEO, Business, Social Media, Home & Garden, Technology, Entertainment, Lifestyle and many more. Be a contributor and write for us (Guest Posting Site UK)!